First things first, sorry for the week-long hiatus. Few things take precedence over The Bachelor, but unfortunately for you all, Mardi Gras is one of them.

Anyway, let’s get it poppin’. We begin this week in the sprawling metropolis of Warsaw, Indiana! Ben is driving in a red pickup truck to hammer us with the small town mood, even though it’s definitely not the actual car he actually drives. He looks more like a Toyota Corolla kind of guy.

Flash to the diner where Ben meets up with his parents. There is a sign that says “No we do not have wi-fi, TALK TO EACH OTHER!” Hostility is so quaint, y’all! Ben is obviously tight with his parents and it’s undeniably sweet; he describes all the women to them and it’s actually a pretty telling conversation. You can feel how into Lauren and JoJo he is throughout his descriptions, and how little he gives a shit about Emily.

After spending two minutes throwing leaves at each other, the women have all decided that Warsaw is a place they would move to, even though Ben doesn’t live there. Emily has already moved her shit into an apartment in Indiana and her and Ben are just going to make it work while he’s living in Denver.

“If Ben were to pick me, I’d come to Indiana and just make babies and start a family right away.” – Emily. I guess anything is better than being born and raised in Las Vegas?

They’re staying next door to Ben’s parents for some reason. “Please don’t watch my parents having sex.” – Ben

Ben tells Lauren that he was the quarterback at his high school and that he goes to a megachurch. This is me trying to be a bitch about the date but honestly it was pretty cute. Going to Ben’s old job at the youth club felt pretty realistic as a date, compared to all the helicopter rides through Mexico City. And Ronnie, the half court king of Warsaw, really made the episode. 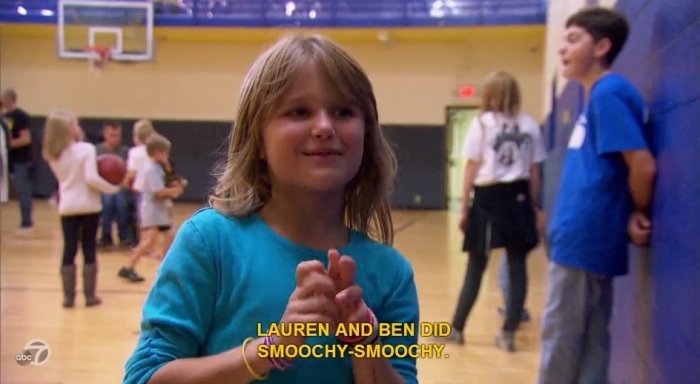 Come on, this is pretty cute.

Then some pussy kid starts crying and Ben comforts him. An ABC producer probably punched the kid in the face to make him cry so that they could film this contrived “Aww, Ben is gonna be such a good dad!” moment.

If Ben took me to his local dive bar, it would be just asking for trouble. You know this bitch would put $35 into the jukebox and play only Mariah Carey songs, then do 10-12 Irish carbombs until I puked. #WIFEYMATERIAL

Next one-on-one: JoJo! The clue tells her she will be in the “windy city,” but there is still some debate amongst the women as to where the location of the date will be. “Well, it’s windy here.” – Emily, sitting in Warsaw, IN.

This feels cruel, considering there is a 5/6 chance she will never be able to wear it again.

This JoJo date is really boring. Sorry, I hardly watched it cause I was texting the whole time. SAY SOMETHING INTERESTING, SOMEONE, PLEASE! Ok, I’m paying attention again. I would just really like Ben to stop calling JoJo “Mrs. Higgins” and then complaining that she doesn’t open up enough. Maybe don’t flippantly call someone your wife when you’re still dating five other women and then expect her to be 100% vulnerable around you? Also, JoJo Higgins would be a terrible name for a grown ass woman. We find out that there will be a group date with Amanda, Caila, and Becca. This will be interesting because I feel like all three of them are really on an equal playing field with Ben. I don’t see a clear front-runner between these three women. This means, however, that the one-on-one goes to Emily. She reacts exactly as I do: 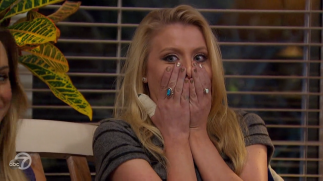 I guess I’m not terribly surprised, because I see Ben sending her home on this date. We’ll see how it goes. I honestly like her and think she’s more self-aware and funny than she gets credit for, but you can tell Ben isn’t that into her. I feel like this is a “I really need more time with Emily to see if I can really picture us being together forever” kind of date where he will promptly send her packing, but I suppose I will find out in the next hour.

First, let’s focus on the group date aka three-on-one aka awkward as fuq. Caila is trying to make the most of this, she’s being aggressive and I can’t blame her, but Amanda and Becca are sitting there pissed. They’re thinking “we are too hot for this bullshit” and I agree.

I really don’t like the way Ben addresses the women’s fears of rejection. There are six women left and every single one of them is perfectly justified in keeping their guards up and being fearful of going home broken hearted. Instead of being understanding and relating to them, Ben basically just tells each woman (with palpable anger and frustration) that if she can’t be completely vulnerable with him and tell him all of her deepest secrets, essentially, they can expect to go home (Jubilee, anyone?). It feels like he is putting a lot of pressure on each of them to completely trust him, when it’s a guarantee that five out of the six of them will be sent home in tears.

Aw, but Becca, that’s *exactly* what he’s going to do.

Drink every time someone says “validation.”

Ok, in all seriousness though, the remaining women are really supportive of one another despite fighting for the same guy. I haven’t seen any cattiness between these six, really. Points for the gurl power.

OMG BEN BRINGS AMANDA ON A DATE TO MCDONALDS. HERE ARE MY THOUGHTS:

I don’t see a ton of chemistry here, but they sure are pretty together. 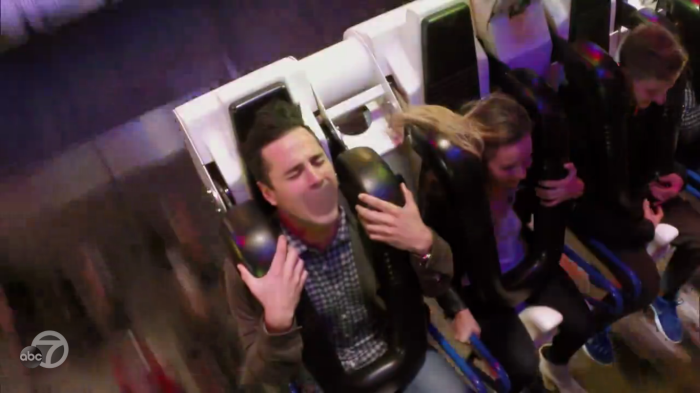 I don’t believe that Ben has ever said a swear word in his life. I think ABC bleeped him actually saying “Golly, gee!” just to try to make him seem less robotic.

Next up, Emily’s one-on-one.

Oy, why are they going to meet his parents? He is clearly not interested in Emily in a serious way. This is painful.

Ahhhhhhhh ABC is giving Emily a bad edit. They couldn’t make it more obvious that she’s going home. She’s only a year younger than JoJo and Caila, but they’re making her look like she’s 15. Ben’s mom hated her so much that she started crying. Not a good sign. Baiiiiiiiiiiiiiiiiiiiiiiiiiiiiiiiiiiiiii.

Are all of these girls about to watch Ben break up with Emily right now? Jesus. This show!

Literally scrambling to not get caught spying on Emily and Ben’s breakup. Fucking A.

The rose ceremony didn’t contain many surprises. I’m sorry to see Becca go but she was never going to take home the gold. She was right to be angry, and I really hope she just stops doing these shows and finds someone to love her without dating five other women simultaneously. Or, even better, that she joins the cast of Bachelor in Paradise and finds herself a Tanner to marry on broadcast television. #JannerForever

NEXT WEEK LOOKS LIKE A DOOZY. See ya then!

One thought on “Bachelor Recap: Episode 7”