Ah the Women Tell All. Where the women don’t really “tell all” but rather talk the same shit and hold the same grudges that they had all season. I love how they all act like they’re so different and changed. Like yes I get that it’s probably traumatic and self-reflective to watch yourself be an asshole on TV, but it’s been….what, a month since filming wrapped? Lace hasn’t even had time to get her 30 day chip, Tiara still desperately seeks attention via farm birds, and Caila still insists Ben is “amazing” despite the fact that he made her confess her love, fucked her, and then dumped her whilst relaxing on some outdoor patio furniture.

But while people might not change, their looks certainly do! These women take revenge hot to a whole new level. Lace rocks the lob. Becca is literally dazzling. Olivia wears a white hot jumpsuit much to the chagrin of all those people writing blogs about her cankles. I’ve tried to get revenge hot before but then I’m like fuck it I’ll just eat three bags of Cheetos for lunch and die alone. So I respect the dedication it must have taken this group of already extremely good looking women to get this much better looking in such a short amount of time.

The audience this episode is really on point. They are nailing all of their *gasp* and *shake your head in disgust* cues. Chris Harrison opens the ep by saying that for the first time in history, a bachelor has told two women that he’s in love with them. The audience is just fucking astounded. Like have you guys not been watching the show? WE ALREADY SAW THAT HAPPEN.

Stop trying to make crashing viewing parties happen it’s not going to happen. Am I expected to believe that these people didn’t know you were coming? They just happened to have a cake with Chris Harrison on it, and a bulletin board of bachelor contestants hung up like murder suspects? Does anyone else find a baby wearing a Mrs. Higgins onesie mildly creepy?

Fact: The average person will spend three years of their life watching what’s coming up next on The Bachelor.

I like when Chris Harrison announces each contestant individually so we know who the audience has decided to hate the most. This time it’s Leah, and she lets us know through her continuous eye rolls that the feeling is mutual. Meanwhile Jami is this season’s contestant that was eliminated two episodes in yet still thinks her opinions are worthy of our time. They’re not. Wait, aren’t all the women usually at WTA? Where is Mandi the dentist or Sour Sammi? Megan the cowgirl was clearly an integral part of this season and I feel like she should be represented here.

Amanda lost her voice and I’m sitting here like dear god why wasn’t it Lauren H.

Control your chicken if you’re gonna be bringing it around

Next we get to watch the women as they watch a montage of themselves talking shit about each other. They save all the best shit-talking for this to get the girls riled up to fight. Emily thinks Olivia is a bully! Becca thinks Leah is a liar! Lace thinks Jubilee’s dress showed her vagina! I wonder how it would feel to watch a highlight reel of people talking badly about you and then I remember why I was such an aggressive brat in middle school.

Jubilee comes under fire with Jami and Amber for saying she is the only “real” black girl in the house. What follows is a splitting hairs argument of what she said specifically and who was there when she said it and it goes on unnecessarily long because Chris Harrison, the all white audience, and the other 25 white women feel too uncomfortable chiming in. #HalfBlackLivesMatter. It’s clear Jubs rubbed some people the wrong way but quite honestly it sounds like more of what we’ve seen already- her saying something meant in a light or joking way that is interpreted differently by the women. She closes with the non-apology that we will hear several times tonight: “I’m sorry if what I did offended you.”

Jubilee comes up in the hot seat which isn’t really as hot because the women can’t constantly interrupt you as they do in your normal seat. Chris Harrison talks to her like a creepy shrink. “Your entire family died. But how did it feel when Ben gave the rose to Olivia on the group date?”

Next up is Lace. Lace is everything. Lace watching this video of herself doing crazy shit is like in high school when my mom would tell me stuff I said to her blackout and I would have to try and look sorry and not laugh. Chris Harrison asks her how it feels and if she’s sorry blah blah. Lace is like sorry? Sorry for WHAT, giving you the best three episodes of television you’ve ever seen in your life? She tells us that she’s really proud of herself and the changes she’s made since the show; she’s only blacked out like twice since then. She then demonstrates that she has not changed at all by agreeing to go on Bachelor in Paradise, the drunk uncle of the bachelor franchise family. She is going to absolutely wreck shit I can’t wait. 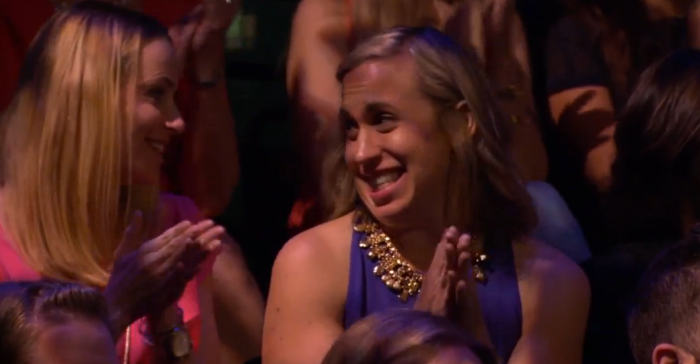 In other news some dude got Lace’s face tattooed on the side of his body. Still a better tattoo than Ben’s side rib bible quote.

Olivia comes into the hot seat following Lace and still thinks she was an outcast for bringing books. Honestly though, I thought she made some valid points. Emily will not quit on this Olivia is a horrible bully kick, yet why did we see Emily constantly talking shit about Olivia’s toes, breath, etc yet we never heard Olivia talk shit about Emily? The most egregious offense Emily has to point out about Olivia is that she stole time with Ben first and that she made what sounds like a passive aggressive comment about a slutty outfit she wore once. I stand by the idea that Olivia is just kind of annoying and unaware more than she is a mean girl. She clearly should’ve tried harder with the other women (we all know at this point that they can make or break you) but don’t think she was deserving of all the shit she got. It was so emotional towards the end I was half expecting Lady Gaga to come out and sing a song about not tweeting mean things to bachelor contestants. When Olivia says she is kind of like Jubilee

Look at Amanda defending her role as a boss ass mom but then taking the high road and accepting Olivia’s apology. Girl’s got class. I want to make her chicken noodle soup with Tiara’s chicken and also raid her closet.

Caila’s up and this is the first time she seems like she’s not putting on an act. Looks like Ben finally got her to stop smiling! She’s definitely still into him and definitely thought she had it in the bag. I’m sorry you got your heart fake broken Caila but you just can’t be the next bachelorette. I can’t deal with you batting your Bambi eyes and nodding earnestly for an entire fucking season.

Ben comes out to confront the 28 women he dumped. Yes, thank you Jubilee, he dumped you guys, he didn’t “come to the end of your journey together” or whatever patronizing bullshit phrase.

Caila is worried that that one dinner convo they had where she was high af stalled their relationship. Ben gives the answer they always give to the second runner up, which is, I just liked the other two more.

Leah is like why did you tell Lauren B. I talked shit about her? And you can tell Ben’s current feelings for Lauren B. by his cold ass answer to Leah which is like bish I didn’t make you lie to the girls that’s on you.

Jubilee makes the valid point that when she was reluctant Ben ended it but when others were reluctant he took the time to let them open up. Ben answers with the following:

This sums up what I think I wanted to hear from Ben all season that I didn’t really hear until now. It seemed like he was constantly saying the women weren’t opening up enough or were being distant or that they weren’t using their time properly to progress the relationship. We saw it with Jubilee, Becca, Leah, and even Jojo at times. When the truth of it is, all of them could’ve opened up 1000 times more (a la Olivia) and at the end he’s still gonna pick Lauren B. Oops omg spoiler alert. Like we all haven’t seen it coming since like episode 4.

Em’s ready to deck Ben if he can’t tell she’s the hotter twin.

For the most part though the women kept throwing him softballs. Seriously idk how these dudes get away with dating 28 women and at the end they all STILL think he’s a great guy. Amanda tells him he will be a great dad. Lauren H. says it’s all worth it for them to go through it if his one relationship works out. Becca literally thanks him just for fucking existing. Meanwhile when it’s the Bachelorette, they’re all like you led us on and you’re a huge whore! But k.

We watch a blooper reel that is 95% Jojo screaming at bugs. Which I could watch all day honestly. She and Becca win this season’s cutest (and most fashionable) friendship. Honorable mention to Lauren B. and Amanda.

Chris Harrison gives his final assessment of Ben as the Bachelor on a scale of Juan Pablo to Sean Lowe, and it’s clear he’s the new teacher’s pet. Apparently to Chris H. the best bachelors are not necessarily the ones with the most drama but the ones who make the women want them most desperately. As he gleefully declared at the beginning, Ben got the most women ever to declare their love for him before he dumped them! Whereas JP said I love you to no one and had like four women walk off. Is one really better than the other? 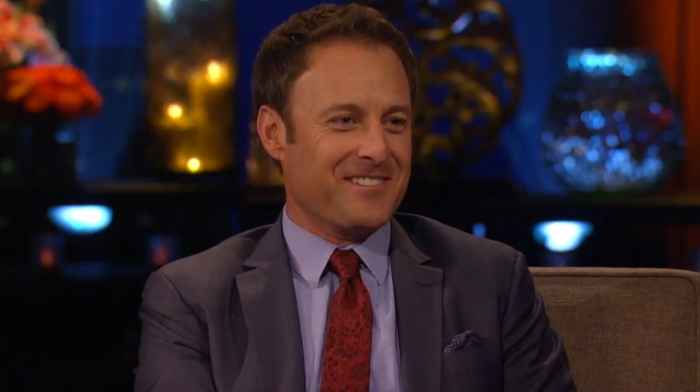 See ya next week for the finale!