Last night on The Chad Show, I mean, The Bachelorette, we all took two hours out of our holiday weekend to watch future BIP contestant Chad Johnson half-heartedly pursue Jojo and whole-heartedly consume deli meats. Everyone who say The Bachelor gets more viewers because the girls are more dramatic/crazy/emotional, I think this week has proven you wrong. It’s because while on The Bachelor we watch interesting women form relationships with the lead and each other, on The Bachelorette we have to watch a predictable and juvenile contest of who has the most testosterone. Let’s just get it out of the way and have the first date on The Bachelorette be an official dick measuring event. Then maybe we could avoid Chad doing pull ups with a probably empty suitcase chained to himself and we could avoid listening to Alex give so much of a shit about it.

For the first group date, Jojo decides to give everyone a huge boner by arriving dressed up in a sexy firefighter get-up. Not sure if it’s actually sexy though or if that’s just the Jojo effect. Either way it provided ample opportunity for fire-related puns that made me scream at my television, such as how Jojo is “on fire” and “smoking hot.” Oh and we can’t forget Daniel’s contribution, which was “she can spray me any day.” I have no words. 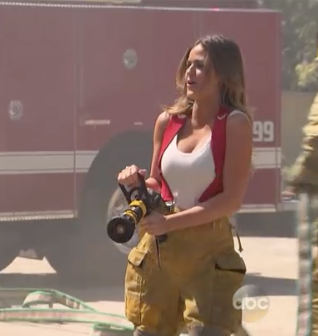 Who wore it better?

I get that it’s in keeping with the theme but was it really necessary to set a perfectly good limousine on fire for this?

It’s unclear what the guys are doing on the first part of this date other than wearing uncomfortably heavy firefighter suits, chopping shit with axes, and trying to be the manliest men. All the men blow up Well’s spot for being a little bitch, and in probably the most embarrassing medical incident on this show, Wells has to quit playing because he’s kind of hot. I feel you though Wells this date looked extremely not fun. And before we freak out about Wells being a huge pussy on this date, let’s remember that she did go for Ben, so…

Daniel continues to really rectify our night one opinion of him by making hose/penis jokes.

Sadly Evan’s hair is not burned off in the flames.

Jojo chills on top of what looks like a random parking structure and makes the guys “rescue” her. This was all a little damsel in distress for my liking and also a dumb and unrealistic test of husband material. If I wanted to test out the men’s ability to rescue me I would just go to a random bar, get super blackout, and lose my phone. Ready, set, go!

Grant, the real firefighter, wins the competition and an extra five minutes with Jojo. I wonder what it’s like to have saved real people in real fires and then to have to do this dumb ass shit.

Luke does not win and is a little too upset about it. Seems to have some fairly serious prince/princess fetish going on. He cries a little and gives us a sad speech about the margin between victory and defeat. Didn’t this guy fight in an actual real life war??

Meanwhile back at the house James Taylor leads the boys in campfire-esque songs about Jojo. Evan is probably so bummed he’s not there to rhyme Jojo and mojo for the seventeenth time. Chad thinks this is stupid and something that Care Bears would do. I mean he’s not wrong but what’s so bad about Care Bears, Chad?

Guess which one is Chad

Things Chad compares the other men to in this episode:

Back on the date, Jojo and the guys head to the classic post-group-date setting of a swanky but kind of tacky outdoor lounge with white couches, a fire, and a pool, just in case someone wants to get drunk, skinny dip, and ruin the evening.

Luke with the dumb hair makes out with Jojo on the balcony and the editors at ABC were courteous enough to amplify the sound of them kissing to a disgustingly off-putting level. Luke seems like the kind of guy who would be all gentlemanly and open your car door for you but then would also tell you the dress you were wearing was too short.

Wells gets the group date rose and is generally just the cutest. Luke shows his desperate/jealous side too soon for my liking.

Derek gets the first one-on-one date. He’s pretty cute but seems pretty basic; I’d say he’s a solid pick for final four but not to win. Those baby blues tho!

Back at the house, Alex, King of the meatheads, makes fun of Chad for being a meathead.

A beautiful friendship forms between Chad and Daniel, who have both so far likened themselves to luxury cars. They discuss the logic of how being assholes means they’re really the nice guys, and high five over their respective coolness. We also hear my personal favorite of Chad’s analogies. I copied this down verbatim so we could all really wrap our minds around it:

C: If you were making a protein shake, made of the group of dudes here, and then you know, blended it up…

D: What kind of shake would you get?

C: Half of that dude protein shake would be, like, have zero chance.

Thank you Chad, I believe we’re all dumber for having heard that.

At dinner Derek tells Jojo that it’s been a few years since his last relationship and he’s never talked to anyone about it before. Guys are weird. Give a girl a glass of wine and you’ll know the name, address, and sexual proclivities of every guy she’s ever dated.

Jojo talks about what she did to get over Ben. Uh that was like five days ago Joj, and I think what you did to get over it is what you’re doing right now. At the end of dinner Jojo presents Derek with a rose and two more choice cards that read
“Dominant” or “Submissive.” Lol just kidding, Derek seems like he’d be really boring in bed.

For the next group date, the guys compete in an ESPN style ranking of where they fall in line as Jojo’s suitors. So basically what we all did for our fantasy draft picks. Except these guys make the men do weird cowboy dances with giant roses to decide.

The guys play a proposal version of Dizzy Bat. Dizzy Bat is a lot like falling in love because it’s exciting and thrilling and you’re drinking a lot and then you fall on your ass and break your collar bone, losing any dignity you had in the process. Which makes this video from a couple weeks ago my official application video to The Bachelor:

Chad knows that the way to a woman’s heart is to call her “naggy” on your first date.

Jordan says loyalty is one the most important things he’s looking for in a wife. Didn’t you cheat on your last girlfriend bro?

Then the announcer guys I don’t know make the guys call out who they think should be last place because drama. Unsurprisingly everybody picks Chad.

Chad then continues to demonstrate his inability to take a joke and says  all the other guys are fake liars, making everything incredibly uncomfortable for everyone. He somehow makes it all kind of make sense though by saying he can’t possibly love Jojo yet and he’s just keeping it #real.

“Chad is being a huge douchebag and I’m into it.” -Jojo

James Taylor admitting Jojo is out of his league is actually cute. His sad handwritten poem is not. Not to be all Chad about this but it does ring a bit false that this dude is crying over how special Jojo is to him when he’s spent approximately 40 total minutes with her.

Ugh if you’re so good with the ladies Chad then why you on this show?

“Chad seems to be overcompensating for something” -Jojo with the understatement of the night.

During their one-on-one time, Chad tells Jojo he has a little dog at home. Someone call the ASPCA to that house immediately. He also tells us his mother died recently which doesn’t excuse his douchery but perhaps partially explains it. Somewhere inside that rugged exterior of bullshit is a sincere Chad.

FINALLY we get to the rose ceremony.

The RIGHT way to a woman’s heart- waiting on the doorstep with a glass of white wine in hand.

Of course all the guys use this move as an excuse to hold group confrontations with Chad about his behavior, THREE TIMES, because those always go so well. Alex has assumed the role as the head of this season’s Right Reasons Police. Do these guys not understand that this is exactly the type of scenario that a chad thrives on? He looks positively giddy as he eats cocktail weenies off a stick.

Chase plans an actually cute moment with snow and mittens and it bodes well for him in my book that he has flown under the radar so far. But we don’t care because Chad.

These bros are so betchy about Chad’s caloric intake. Chad is a jerk! Chad’s not here for Jojo! Chad eats too much baloney!

“This isn’t a game.” -Chad, whilst eating ten pounds of lunch meat and winking at the other men.

Lol and you guys thought Olivia was a villain. Chad interrupts about ten people’s convos with Jojo at which point she’s like “gimme a sec u freak,” a first in Bach history that I’ve seen. Alex tells Chad he is creepy. Generally psychopaths don’t take well to being called psycho, so Chad lets a couple of death threats fly and points his finger in Alex’s face. He can point his fingers while Daniel pokes belly buttons and together they’ll be an unstoppable team!

During the rose ceremony Chad evilly eats ham and gives us commentary on how much each of the guys suck. Alex is really short! Ha ha! Christian do you even go to this school?

But in case we were all wondering who Christian was, we get a little snippet that shows that Christian decided for his cocktail party move to undress and take a bath in front of Jojo. That wasn’t weird or uncomfortable at all.

Alex is mad that Chad gets a rose, saying that a rose is supposed to mean you’re one of the best bachelors in the country and symbolizes that you’re a good guy. Dude have you seen this show? Among the people to receive roses last season were Tony the healer, a man nicknamed Cupcake, and JJ Lane.

Superfan goes home leaving the only man left in my fantasy league as…you guessed it, Chad. Who from the looks of next week either goes home or murders all the other contestants. Possibly both. Let the bloodbath begin!

One thought on “The Bachelorette Recap: Week 2”