Finally! It’s over! I need a break from this mumbly man and his flesh colored facial hair. Nick is over it, we’re over it, his family is over it, even the studio audience is over it. Unless you’re a fan of Dancing With The Stars in which case I’m sorry, it’s not over. Although I assume he’ll have less opportunity there to talk about his many many feelings.

We open the finale back in Finland. Nick realizes he is being followed by a group of people dressed as elves, so he does what we all would and starts skipping along with them. We’ve come a long long way from the skeptical sour puss Nick of Andi’s season.

Did I miss the part where this was a musical episode?

Nick’s family is here and the tone is somber. Nick’s mom describes how both times in the past thy were all convinced it would work out for him. Bella realizes she is the smartest member of her family even though she’s 12. Wouldn’t it be amazing if Bella went through a preteen identity transformation since we last saw her and was like goth now or something?

Raven shows up and everyone just continues to be very quiet even though Nick has like seven anonymous siblings present. Why don’t you guys speak? If this were my family we’d literally need a talking stick. Nick’s dad looks like he’s just constantly on the verge of bursting into tears. Which, like, considering the situation maybe he is.

I guess they like Raven okay but it’s unclear since I can’t tell you a damn thing they discussed. Vanessa comes over. She has questions for Nick’s mom which is usually the reverse of how that works, but we’re still playing up the “Vanessa’s going to reject Nick storyline” I guess.

“I take being engaged very seriously I only want to be engaged once.” -Everybody who gets engaged on this show and then calls it off

Vanessa and Nick continue to talk about how they need to “figure things out” while still not actually figuring anything out. But hey who needs to live in the same country when you have a 90K ring on your finger and all the Diff Eye Wear shades your heart could desire? 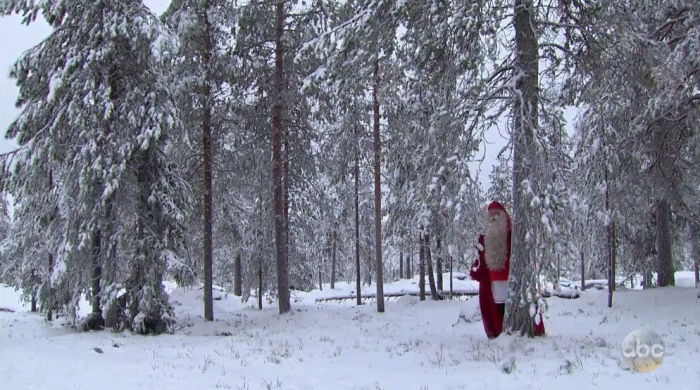 Nick and Vanessa visit Santa Claus, who I guess lives in a shed in the middle of a Finland forest. Who knew? What language is he speaking? Phew, Santa is bilingual. They sit on his lap and tell him their hopes and dreams.

Santa: What do you want for Christmas

Just kidding Nick wants true love too, so Santa presents them with a wooden plaque that will make them fertile. Chill out, bro.

They go talk in a cabin. Vanessa always seems really surprised that there’s other women still on this show. She has a lot of doubt and uncertainty which seem like great feelings to have going into an engagement.

Nick and Raven have a really cute date actually. Everything is easy with Raven (and difficult af with Vanessa) but sure let’s not pick her. They go skating again because skating is their thing and then they make out lying on top of the ice because making out while lying on outdoor surfaces is also their thing. I can’t believe I almost fast forwarded and missed the puppies. 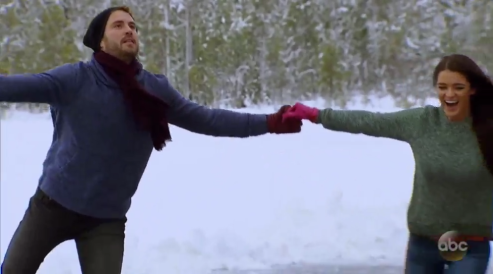 Nick decides who to propose to over a brief cup of tea. Neil Lane comes in and tries not to lol as he describes princess cuts to this guy for the 4th time on television.

Poor Raven. Some producer got her to be a lot more confident going into this finale than she should have been. Probably the same one that got her to do that “I just had my first orgasm” montage last week. This cabin is ugly as hell. You don’t need this Raven.

Raven just keeps smiling or her face has been frozen into that smile forever by the Finnish winter winds. She gives up on love on the limo home but something tells me it won’t be long before she’s back in the saddle (obvi intentional) with Luke Pell on Paradise.

Nick and Vanessa get engaged and promise to just be happy and to not have problems and to, wait for it…figure things out. Their fav couple hobby. Keep sweeping things under that fur pelt rug you guys.

On After The Final Rose, shit is once again kind of a downer. The audience is lukewarm at best, Chris H. continues to barrage the “happy couple” about questions on all of their issues, and Nick looks not here for it. He honestly looks like ABC has finally drained of him of his soul. These two could very well be faking it til they make it. And by make it, I mean make it past the ABC contracted time that makes them give back that ring. But hey, I’m a sucker for a hot couple, so I wish for the best.

Rachel comes on, but rather than just letting shit be, they decide to pull a fast one on her and start her season of The Bachelorette right here right now! Ah, let the emotional manipulation of their new lead begin. See you then.