This season’s hometowns episode featured a converted Sikh man banging a gong and a borderline psychopathic Cuban mother threatening to murder our Bachelorette. Let’s. Get. Into. It.

Eric’s hometown is up first and……….YOU GUYS……..I fucking love Eric. Rachel meets him in Baltimore and he shows her around the city a bit. Eric has this really astute way of always putting things into context, be it social dynamics of the guys in the house or the complexities of the city in which he grew up. He never views things in a vacuum and does a nice job of painting a complete picture. Does this make sense? Idk. I just think Eric seems so thoughtful and conscientious and measured. He opens up to Rachel about how throughout his childhood, he managed to stay above the fray while many of his friends and family members were involved in crime. Eric almost certainly won’t win this season, but he has a really good head on his shoulders and will find another lady in no time. His family is similarly wonderful – they are so excited to meet Rachel and welcome her with open arms. They also all do the same “ayeeeee, ayeeeee” dance that Eric does whenever he greets Rachel, which I for one will never tire of watching. His Aunt Renee is a complete made-for-TV superstar who made damn sure her outfit was looking right for those cameras, and seemed to bond with Rachel really quickly. Eric’s mom was more reserved, but she and Eric had a very honest heart-to-heart about their relationship. She admits that she was at times withholding from him when he needed her most, in an effort to make him stronger and more self-sufficient (*cough cough* Take notes, Dean’s dad!!!). This family has clearly faced some tough hurdles but there’s a lot of love in this house and I can see how Eric became the lovely little dreamboat he is today. I HATE WHEN THERE’S NOTHING TO MAKE FUN OF! 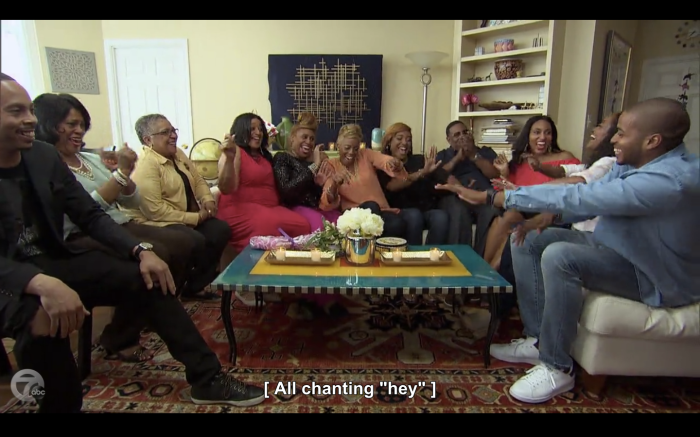 Get these folks a sitcom.

Next, Rachel travels south to Miami to get her nut, err, visit Bryan, and says “Miami just screams Bryan. It’s hot and steamy, sometimes it speaks to you in Spanish, and oh god, is it obvious that I’m super horned up right now?” They have a sweet day of playing dominos and dancing in Little Havana, all leading up to the moment of truth when Rachel finally has to meet Bryan’s crazy-ass mom who is linked to the mysterious disappearance of his last girlfriend. Those spicy arepas cannot be sitting well in her nervous stomach while approaching that house. Things go well with the family and they seem to like Rachel just fine, but his mom is just one huge walking, talking red flag. Rachel, girl, GET OUT OF THERE. Mothers who refer to their 37 year-old sons as the “love of my life” are nightmares, no exceptions. For the rest of your natural life, that woman is going to find reasons to nitpick the way you decorate your home, raise your children, dress, eat, cook, and breathe. You better get used to Christmas in Mee-ahh-mee, Rach, because Bryan is not leaving that woman alone during the holidays. And when she gets old, you had better believe she is moving into your guest room. She cried about how much she loves her 37 year-old son, she is NOT about to let you put her into a nursing home. And I know we all had a little laugh at the “I will kill you…. jajaja es una broma!” moment, but can we really be sure she wasn’t dead-ass serious? She reminds me of Beyonce’s character in that weird movie where Idris Elba cheats on her with Ali Larter. Am I the only person who watched that? Cool cool cool cool cool cool cool. 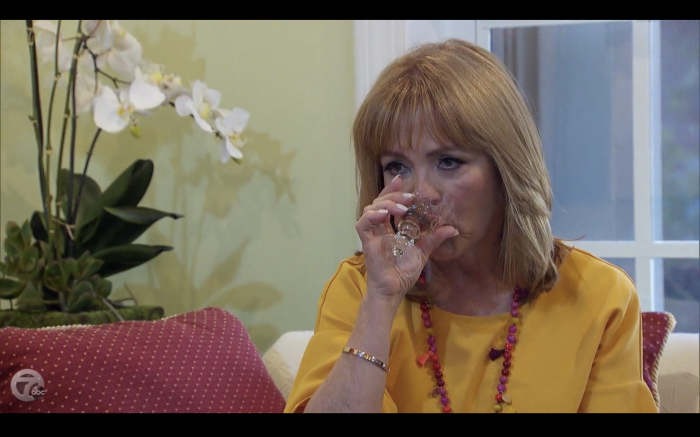 Watch your back, Rach.

Regardless of the Oedipal situation at Bryan’s house, Rachel leaves on cloud 9 and jets off to Madison to see Peter. Okay sorry, but this is my blog and I need to talk about Peter for a little while. Peter is extremely attractive. I struggle to cope with the feelings that he causes to occur inside of me. I’m not sure I’ve ever seen a face or head that pleases me more than Peter’s. I also really like when he wears a heather gray t-shirt because it looks really nice with his heather gray hair. I do not care what he says or does. He should be chosen as the winner purely based on his appearance. Anyway, they go to the Madison farmer’s market or something and then Peter tries his hardest to prove to Rachel that some of his best friends are black. His friends and family both seem to like Rachel because WHO DOESN’T? but the show is still pushing a made-up problem of Peter potentially being skeptical about proposing to Rachel. While I definitely understand why Rachel admires Bryan’s absolute certainty about what he wants, I also don’t really see any real issue with Peter’s outlook on this. All he’s saying is that if he’s not ready to propose, he won’t propose. Would you really want someone to propose to you if they don’t feel ready to propose to you? That’s bananas! Again, this feels like something they’re really latching onto to just to create some drama and suspense around Peter’s storyline. There’s no doubt in my mind that Peter would propose if he was the last man standing. AND ALSO HE IS SO FUCKING HOT. 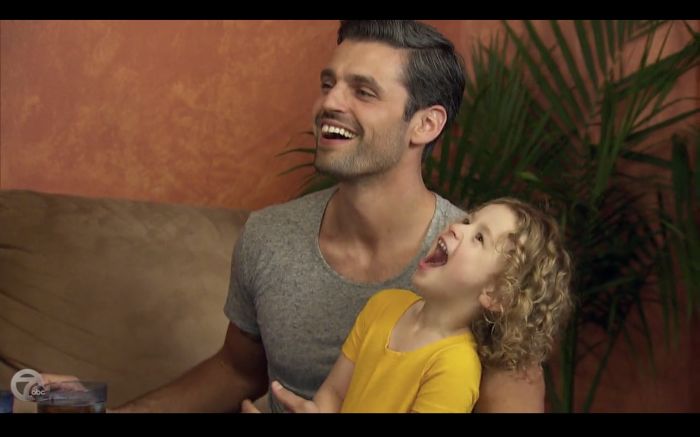 It’s not even fair.

The final hometown is Dean’s, and it was a doozy. Rachel meets Dean in Aspen in her very cute autumnal beanie/sweater lewk, and he explains a little more of his family’s history to her. He hasn’t seen his father in two years, and they’re about to reunite under what would be very strange circumstances even for families with a healthy and normal relationship. Rachel remains open-minded throughout this whole experience, but I really felt bad for Dean – he’s incredibly well-adjusted considering what he’s been through, but coming home, he just seemed so fucking embarrassed. Now, I won’t rely on cheap jokes about Dean’s father’s religious choices, except to say that I laughed really hard when he served them sprouted mung beans, because sprouted mung beans just feel like such a hilariously stereotypical thing for a weird television character to serve for dinner at his house. I’m sorry, but sprouted mung beans are a punchline. Beyond that, the problem with Dean’s father isn’t that he decided to study and convert to a new religion after the tragic death of his wife. That is very understandable, and I’m certain it has helped him find comfort in coping with such a tough loss. Plus, I love a good shavasana and would not mind if my in-laws encouraged me to lie on the ground and close my eyes for a while after dinner. The true problem with Dean’s dad, unfortunately, is that he’s a fucking dick. He offers every flimsy cop-out possible when confronted about not being there for Dean as a kid mourning his mother’s death. Dean has very real reasons to be disappointed in his father, who instead of trying to understand and apologize for abandoning his 15 year-old son, replies that his complaints “sound like person problems” to him. What a fucking asshat! Your son’s personal problems are also YOUR personal problems! Now, it is also really okay for a parent to fall short in some areas when their spouse dies. Maybe you don’t know how to cook or do traditionally “maternal” things for your kids because your wife always assumed that role. But fucking A, man, it doesn’t take much to just be there for them emotionally. You’ll figure out how to cook dinner eventually. The real kicker was when he said he “must be a really good dad” because Dean came out so well. Dean clearly grew up well in spite of his father, not because of his father. I’m not sure how he managed to not slap him in his sorry face. He’s also rude as hell to Rachel, which I didn’t like, but also……Maybe this deeply broken family should not have agreed to try working their problems out on The Bachelorette? Maybe Rachel shouldn’t have pushed Dean to confront his estranged dad about abandoning him when his mom died because Rachel just met Dean last month and this problem has been festering for 11 years? Maybe Dean just could have shown Rachel his high school or introduced her to some old friends instead of his deeply troubled father? MAYBE THIS WOULD MAKE A GOOD EPISODE OF WIFE SWAP? Can we please switch out the mung bean-eating step-mom with King Curtis’ mom or perhaps the God Warrior and make television magic happen? I feel bad about this. Dean is such a precious little baby and his family is horrible and I’m out here plotting a spin-off show about his crippling emotional pain. 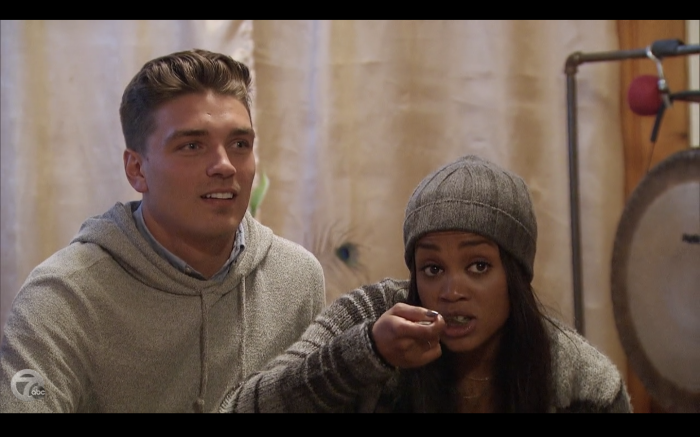 Rachel is a real one for choking down the mung beans.

Sadly, Dean is our most recent rose ceremony casualty. I genuinely don’t think this had anything to do with his fucked-up home situation, though. At this point in the show, there’s usually not really anything wrong with the eliminated contestants. She just wants to bone the other three slightly more in the Fantasy Suites next week. See you in Paradise, Deanie Baby. Sorry about your fuckin’ dad.

2 thoughts on “The Bachelorette Recap: Episode 8”