The grand finale. Where Eric inevitably gets sent home because she just wasn’t that into him, Rachel and Peter inevitably break up, and Bryan inevitably proposes with a giant Neil Lane rock. The only surprise here was that rather than having Rachel come out on After The Final Rose, she’ll be watching and reflecting throughout the episode. Because if there’s one thing this show needs, it’s more of people talking about their feelings. “Why do you keep doing this to me?” Rachel asks Chris Harrison. I ask the same question every week, Rach.

Chris Harrison opens the three hour finale with one of his favorite things, throwing shade at Juan Pablo. He tells us that former Bachelor Juan Pablo got married and ASKED ABC to spread the news, all while never mentioning his wife’s name or showing a picture. Can we get a slow clap for Chris Harrison’s pettiness?

Your wedding photos, when you actually marry the guy that slid into your DMs

We’re back with Peter and Rachel dipping their proverbial toes in the water of their irreconcilable difference that will eventually be their undoing: the proposal. (You with me? It’s late). But Peter and his gap tooth are so gosh darn cute that Rachel decides to sweep the issue under the rug for now in the hopes that his feelings will change in the next “week.”  Girl. Peter tells Rachel that “there’s something here that is undeniable” with all the conviction of my ex-boyfriend saying he wanted to be exclusive. Much like that, this will not end well. Rachel cries and Peter tells her that watching her cry has “advanced things a long way.” Her tears have awakened his cold dead robot heart. Why do guys always think tears are so important? Bitches. Love. Crying. At least I do.

UGH we still have to get through Bryan’s one-on-one. Boring bore I’m bored. I’m sure the Rioja region of Spain is very nice and I’d have a lovely time getting drunk there but these vineyard dates are getting so blah.

“Bryan wears too much red.” -Me, searching for some beef with Bryan

Time to fire your candle guy, this has gotten out of control

Rachel is being “weird” because she got fuckboy-ed by Peter and now she wants him all the more (same). Bryan confronts her at dinner and with the air cleared they head off to the fantasy suite, which Rachel says she entered with a list. These bros thinking they’re heading off to bang Rachel but instead they get extensive questioning on their HMO. Yes. Does Bryan wax his chest? Is this common nowadays? Does Blue Cross Blue Shield cover laser hair removal? How are we still not at final two?

Rachel comes out for the rose ceremony lookin gorg in that dress that looks hella ugly on the rack but then your Mom is like “Try it on, you never know, it could be cute!” and so you’re like “Ugh fine mom” cus you’re a brat and then it looks amazing and you’re mom’s like “I told you so” and you’re too excited about finding a great dress to be annoying. Except not because Bachelorettes don’t buy their rose ceremony dresses off a rack like commoners. (You with me? It’s late). Rachel is over the tears and she looks Peter dead in the eyes and says she wants a proposal at the end of this and if they don’t give it to her they’ll be fucking sorry and then she of course sends Eric home instead. 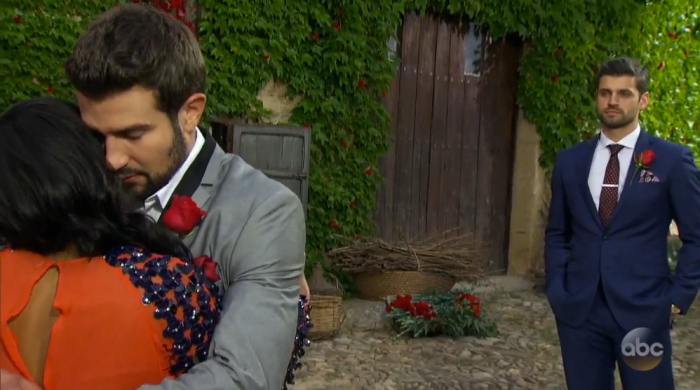 watchin your HS crush at a the winter wonderland dance like…

Peter tells us again that he’s “not ready to lose Rachel” which again makes it sound like losing Rachel is the inevitable outcome. As is tradition, Rachel initiates a polygamous cheers with Bryan and Peter who hate each other’s guts.

Eric grew a beard and I’m here for it. They have a very pleasant and boring break up chat. Resident pot-stirrer Chris H is like “You got him to say ILU 4 the vry first time! Wasn’t that humbling?” Why do people always say shit is humbling that is exactly the opposite? I’d be like “I know, I guess I’m fucking amazing.”

Now we have another boring ass date with Bryan. Didn’t I just fucking watch a date with Bryan? What makes you think I wanna see another one? They try to spice things up with a romantic hot air balloon ride. The passengers include Rachel, Bryan, and the hot air balloon operator who probably had a supes amazing time listening to them overuse the word amazing. Bryan gives Rachel a Spanish/English dictionary with the word “esposa” highlighted a whole bunch. Bryan wants any reason to speak Spanish with Rachel bc he knows that shit turns her on. He says if Rachel doesn’t pick him it will be the biggest mistake of her life. Boy these men sure do have a lot of strong opinions on the right and wrong choices this woman is making for her life. (Me, still searching for beef with Bryan).

Peter doesn’t want to marry Rachel so she takes him to a church to talk to a monk about marriage. I see what you did there. Why do old religious men who can’t marry give so much advice about marriage? The monk gives them sage pieces of wisdom like “It’s very important not to give importance to those things that are not very important.” I’m with you, but unfortunately Rachel and Peter are fighting over an engagement, not who used up the toilet paper without replacing the roll.

Peter doesn’t want to get married but he does want to go to various sporting events and attend wine and painting classes. (How has this not been a group date yet?) Rachel doesn’t understand why Peter keeps painting a metaphorical picture of their future together but won’t get down on one knee. Can he paint with all the colors of the wind?

Suffice it to say, Peter isn’t wrong. Do we need to run over the statistics of Bachelor relationship success rates, or rather failure rates? It’s honestly refreshing to see someone not so over the top arrogant as to think THEIR relationship will last forever unlike the others only to break up in a couple of months. If a proposal is that big a deal to him that he only wants to do it once, not proposing is just sensical! He eventually caves in a “fine I’ll do it” way, but Rachel wants him to want to propose, not to give him an ultimatum. I’d bet a good chunk of engagements occur out of this very same situation. This is like the realest thing we’ve ever seen on this show!

Peter comes on live, it feels weird to break these up like this before we’ve even watched the proposal. Peter looks good. It is tense. He had to walk by her eyelashes on the floor for two days before room service cleaned them off his floor. Rachel tells him her life is far from mediocre and Peter just came here for a good time and is honestly feeling so attacked right now. I don’t get why we are still rehashing this and what she still doesn’t understand about the situation. He wasn’t ready to propose to her, it’s not that complicated! Rachel repeatedly tells him that this process probably just isn’t for him because it moves too fast. Read: Your ass better not be the Bachelor now and propose to some other woman in the same time period. I gotta say I disagree though. Peter does know what he wants, he just didn’t want it with Rachel. THERE I SAID IT. 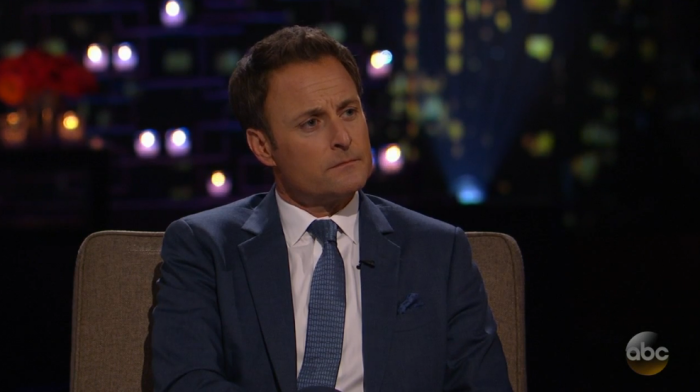 Bryan, however, does want it with Rachel. Once again the first impression rose winner wins the Bachelorette. Let’s hope these two crazy kids are in it for the long haul because they’d have some hot ass children. Those bilingual mixed race kids would get laaaaaid.

Bryan comes out and re-proposes to Rachel. Betcha thought that was a lot cuter in your head huh Bry. These two look happy but haven’t even decided where they’re going to live. I love when Chris Harrison asks the lead “when they knew” like they didn’t just have to pretend to not know up until the very last second. They get a sponsored trip back to Rioja which sure is a lot better than Pennsylvania but at this point they’re in for a life of free travel via instagram endorsements anyway.

Now Chris Harrison teases up for Bachelor In Paradise which is what we were all waiting for anyway. He brags that their sexual assault controversy has been trending on social media worldwide! I’m sure the show will handle the situation with nothing but tact and grace as always. That being said, this preview had me on the edge of my seat. Kristen and Jack Stone? Ew! A Robby-Raven-Amanda love triangle? Whiney Derek with whiney Taylor? Beautiful Dean is going to break Kristina’s beautiful heart? Danielle got a boob job? Wells is bartending? Where is Jorge???? At least I only have to wait until next Monday to find out!

One thought on “The Bachelorette Recap: Finale”