The whole two-episodes-per-week thing is really taking a toll on me y’all. It’s too much TV!

My D&H partner wrote the recap last night and did not make nearly enough of a big deal over Tr*mp interrupting the episode. Fuck that guy. I swear to God, he terrorizes me all day every day. All I hear 24/7 is stupid, scary shit about that fucker and his inability to do literally anything right. I get roughly 1,000 phone alerts a day about him. All I ask for is a few hours a week to escape to Paradise, and he won’t even let me have that. STOP INVADING EVERY ASPECT OF MY LIFE (and Afghanistan)!

Anyway, we return to regularly scheduled programming to find the gang in various states of disarray on a dirty beach. Kristina is depressed because of Dean’s disrespectful ass half-birthday stunt, Wells is totally winging it behind the bar, and new arrival Sarah is shaking things up.

Raven reveals that Sarah has already spent at least one night “cuddling” with Adam during the production delay. This makes me think about how much the others know about contestants who are still on the outside – mainly, I’m wondering if Dean “pumped the brakes” with Kristina because he knew D.Lo was coming. Is it D.Lo? DiLo? D-Lo? Idk. I’m going with D.Lo because that’s the same format as how we spell “J.Lo.” ANYWAY, I am highly suspicious that Dean was slowing it down with Kristina in order to keep his options open for the new arrival because he is a fuckboy and played all of us.

Back to Sarah. Every girl in the house pushed her super hard to go for Ben Z. but she clearly came here specifically for Adam. I am not sure why no one is going for Ben Z. I am also not sure why we keep calling him Ben Z. when there is no other Ben around anymore. Sure, he definitely lets his dog lick his toes, but come on ladies! He is a hot ass beefcake! You don’t have to like his personality – this is Paradise! Get your nut! For some insane reason, Ben Z. is struggling to find any interest while ADAM has two women fighting over him. The pickins are so slim in Paradise. Sarah, Raven, come on! You are both like, five levels hotter than this dude. 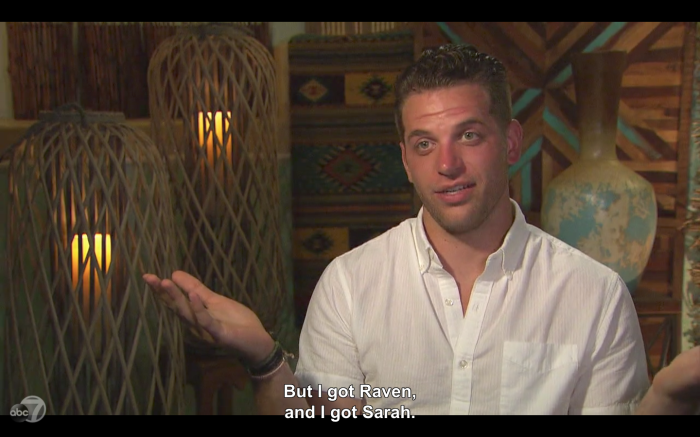 It honestly must be so easy to be a man.

Sarah and Adam leave for their date and Sarah is very clearly not here to play. She puts her pussy on a damn platter for this mediocre guido. She remarks that their date is “like a Nicholas Sparks movie in real life!” and I just……..I don’t even have a joke for that……

Lacey, on the other hand, cannot find a single dude who wants to go on a date with her. Maybe they’re thrown off by her insane method of eyeliner application. Girl, are you gearing up for a trip to the local mall to blow your Hanukkah money at Claire’s? Are you about to take a sick set of scrunchy-faced selfies on your shared family digital camera? Are you about to buy a decoy movie ticket to Spy Kids 2: Island of Lost Dreams and then sneak into the other theatre screening Swimfan? Lay off the waterline, Lacey! In any event, it was pretty awkward to watch her get rejected several times before Diggy finally said yes to an afternoon on one of Jorge’s famed Tour-ges. Everyone just seems sort of generally irked by Lacey; it doesn’t appear that she has done anything wrong, I’m just not sure she fits in with this group. But Diggy was happy to go on the date, despite being Lacey’s last choice, and they had a good enough time. Also, Jorge revealed that the “romantic” location he brought them to is where his parents conceived him. Jorge, my guy, this tour-ge has taken a weird turn. When you find out you’re sitting in the very spot where Jorge’s dad rawdogged his mom.

Back on the beach, Danielle is preparing to leave Paradise while Wells is gushing about how great she is. He says, “she’s way out of my league,” “she’s one of the good ones,” and “she’s one of the best people I know” within a two-minute span. Why. Aren’t. These. Two. MARRIED? This is some Jim and Pam level will-they-or-won’t-they drama and I love it. I’m so invested in these adorable little buddies. I’m not even annoyed by Danielle’s voluntourism in Africa because she’s a nurse with a real skill to offer!

Just as Lacey is reflecting about how well her date went with Diggy and how nothing could possibly go wrong, Dominique walks in and ruins her life. Dominique is ridiculously beautiful and Diggy is definitely interested in her. Taylor also clearly wants Dominique and Diggy to go on a date, and pushes for it aggressively, while Lacey freaks the fuck out. She’s furious with Taylor for “matchmaking” and is sobbing at the thought that Diggy, her last-resort date choice, would consider a date with another girl. I can’t deal with Lacey. I am, however, thrilled for Diggy, who is getting two one-on-one dates in a single day, after getting jack shit on Rachel’s season! His date with Dominique went well, even after that strawberry fiasco, and methinks she’ll be getting his rose this week. The only man who can save Lacey now is Daniel. Think about that for a second.

Danielle makes the final decision to leave in part because she hasn’t formed a strong relationship with anyone in Paradise (the irony!). She says goodbye to everyone and makes her way over to the bar for her most daunting farewell. Wells seems so genuinely sad that she’s leaving and walks her out to the car. There is so much tension. I’m screaming internally. They kissed!!!!! I’m screaming externally now!!!!! It was so cute. I rewound it and watched it again. I am giddy about this relationship. I am going to make YouTube compilation videos of Wells’ and Danielle’s cutest moments set to an acoustic Jason Mraz song. 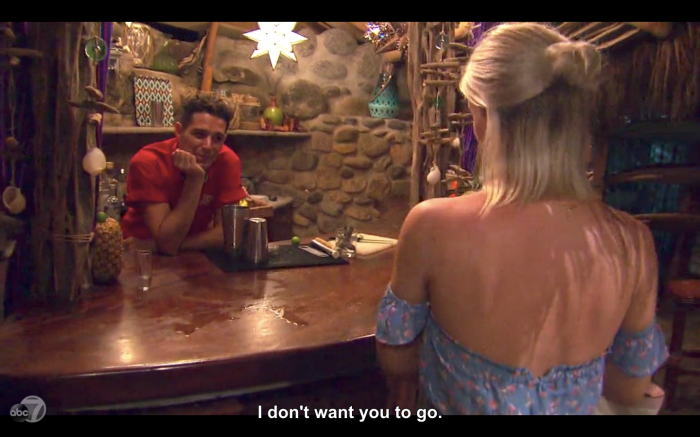 I am definitely not crying.

The latter hour of this episode was dedicated to the live interviews with Carly and Evan about their weird relationship, and with the cast members about the assault allegations. I’ve written enough about both of these topics.