Damn, are we about ready to call it? These episodes are making me, a viewer, stir-crazy, and I’m not the one stuck on a fifty foot beach with a man who nicknamed himself “tickle monster.” Maybe it’s that after the shut down there were only ten days to film. Maybe it’s the complete 180 of a former fan favorite. Or maybe it’s the fact that contestants like Jack fucking Stone have somehow been elevated to “catch” status. Idk, but this season fucking blows. The words “almost paradise” have never rung more true.

Dominique opens by giving us a recap of the “strong couples” we’re supposed to be rooting for. Outside of Derek and Taylor this list includes couples who have literally been together for two days. But sure, we’ll pretend Lacey and Daniel aren’t a menace to society. Robby tells Dean that Kristina witnessed his foreplay with DLo in the pool last night. “You guys were there?” Dean exclaims. “Why didn’t you take her down to the beach?” Maybe because it’s not Robby’s job to police the whereabouts of your girlfriends so they don’t see you being a Grade A wang.

“All of the blame is falling on me,” Dean pouts in his ITM. Notice how he’s still trying to somehow get us to feel sorry for him in this debacle? He sidles up to Jasmine and Raven as Raven asks about his night. “Did you make out with DLo some more or did you go back to Kristina again?” Raven is a homie.

They must be scraping the bottom of the barrel here, because Blake has arrived! Not hot af Asian Blake gone too soon from Rachel’s season, but aspiring-drummer/whaboom nemesis Blake who we’ve only just purged from our memory. He shows up to a smattering of shit-talk and not so subtle eye rolls. If Tickle monster and Jack Stone think you’re a loser, you might want to reevaluate your life decisions bud. In case you didn’t already hate Blake, he decides to get the lay of the land by saying, “Can I get bros from my season to come have a man chat? Don’t worry ladies I’ll get to you.” Run, ladies, run! Also, isn’t that just like everyone but Robby? 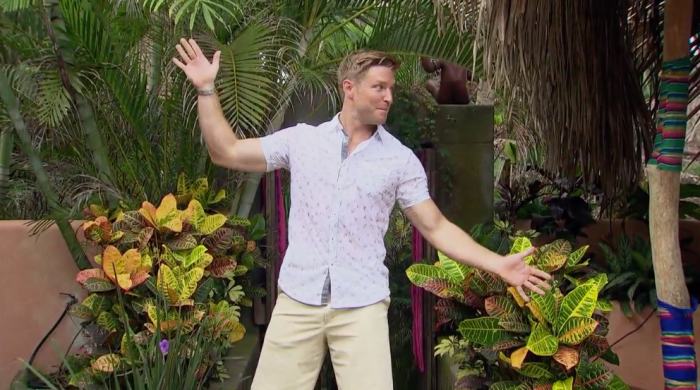 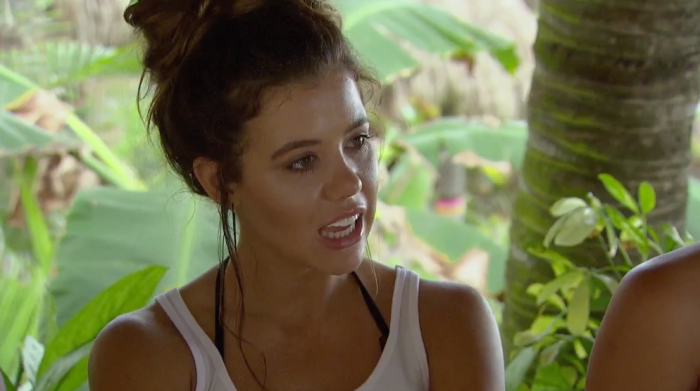 Blake takes the women aside one by one for them to reject him. Kristina does not calm down on the orphanage comparisons, saying “When I was in the orphanage all I wanted was to get picked.” We get it, Blake is fucking disgusting.

Not to worry though, Fred is here! Remember the vaguely stalker-y guy who harbored a “love” for Rachel from his days as a youth? Would we really describe Fred as “smoking hot?” Paradise goggles are hard at work.

Blake asks Kristina on a date. She would rather sell herself to a Russian prostitution ring. Blake asks Christen on the date because she’s the only person he talked to that didn’t feel like pulling teeth. His literal words, not mine. Christen’s like “wow lol I’ve been heavily pursued this week!” By Jack Stone and Tickle Monster, bitch calm down. This is the most nauseating love triangle ever.

Jack Stone is coming to terms with the fact that in Bachelor world he’s lumped into the same category as Blake. He punches Robby in the dick and all the women make out with him for no reason. I don’t think your life is getting any better than today, Jack.

Dominique, Fred, Blake, and Christen go on a speed boat and zip lining date that almost look worth the price of Blake’s company. Christen spends half the date trying not to throw up and the other half trying to get her contact out. Blake keeps trying to convince Christen she’s having fun so he’ll get her rose. I’m very uninvested in the outcome of this situation.

The producers love Amanda so Robby gets a date card to take Amanda to a restaurant, the same restaurant where Ashley I told Wells that Hanson was her favorite band. I miss her. What do these two talk about on their own? I thought this date might answer that question but no, just the obligatory remarks about how great everything is between them so we can act excited when Amanda gets engaged to another man she met on a beach < two weeks ago.

The rose ceremony will be tonight, a small miracle. Someone says this will be tough because everyone deserves to be here. “But do they though?”asks Raven. Diggy is worried Dominique will pick Fred over him so he arranges a cheesy ass card game with questions like “kiss or hug?” She picks HUG. Savage. They’re kinda cute.

Christen is sitting here like “I’m the girl version of Wells” and I guess everyone decided it was time to take her confidence down a notch by revealing her secret nickname. Cheers Scallop! Wells is such a betch trying to act like being nick-named Scallop Fingers is cool. “What, you don’t like your gross embarrassing nickname? We thought it was cute haha!”

Danielle is tired of Dean’s bullshit and says if he’s not going to make a decision than she’s going to make one for him. At first I took that to mean she was eliminating herself from the equation with her outfit choice. But no, she tells him if he accepts Kristina’s rose she’s done. At least this will finally be over no thanks to Dean.

When u put on your chain mail five shots deeps

Dean approaches Kristina and says, “You pretty much dumped me today.” Ah, the classic “twist it around on you to make it seem like this is your idea” approach. I guess I didn’t think better of u at this point Dean. He tells her that after ruining her entire Paradise experience, he’s ready to pursue DLo full time, but plz don’t hate him. Kristina lashes out not only at Dean, but at DLo who she thinks is not a girl not yet a woman.

Raven is right when she tells Kristina to focus her anger on Dean rather than at DLo. But it’s not what Kristina was ready to hear at this point. Her anger/jealousy toward a former friend isn’t necessarily justified but it is understandable. Defending DLo could’ve been a later conversation. It’s Wells who finally drops the wisdom bomb: “Why are you fighting for someone who isn’t fighting for you?” Someone get this man a lectern.

Kristina ends up mostly saving face by bowing out and leaving Paradise rather than making things worse. It took her a while to get there, but she finally did. Freddy and Blake go home, because if ABC wants to throw a wrench in the works they’re gonna have to do better than these two. See you next week to watch the twins scream at everyone in an effort to stay relevant.

One thought on “BIP Recap: Episode 7”