With the departure of Kristina, things are a little intense on the beach………..for everyone but Dean, who is now free to fingerbang D.Lo in the pool as much as he wants! The other couples are in pretty good shape too, which means it’s time for a new arrival to ruin everything. Cue Jaimi! You see, Jaimi is bisexual. That means she likes boys AND girls! That means we have to talk about it every single time we reference Jaimi, and entertain the idea that she might date one of the heterosexual women on the show! Her date card does say she can choose *annnnyyyyooonnneeeeee* she wants, after all! Tantalizing allusions to girl-on-girl action!

This show is a problem.

Jaimi settles on Diggy as her suitor, and they head off on a date. Dom is worried but she did just go on a date with Fred, so she doesn’t freak out too hard. Diggy opened the date by incorrectly guessing Jaimi’s ethnicity, so needless to say, it was a major success. Methinks Diggy will still pick Dom over Jaimi at the next rose ceremony, but we’ll see.

The majority of this short episode revolved around the twins. Man, I am tired of the twins. On the last season of Paradise, I welcomed the twins as a funny source of narration and the voice of reason in the Amanda-Josh debacle. Since then, though, they’ve been on Ben and Lauren’s reality show, and had a full season of their own. I’m pretty much done with them at this point. They’ve never been the type of contestant who even pretends to be “looking for love” on the show. They came on Ben’s season as a clear gimmick, and have been cashing in on it ever since. Now, to be fair, all of these people cash in on their B-list fame, and most of them are probably not really looking for love. But with the twins, it’s egregious. And I’m sorry, but after this much twin content, I just no longer think it’s funny. I can’t watch these grown-ass women wear matching clothes like little kids preparing for their annual Sears family photoshoot anymore. 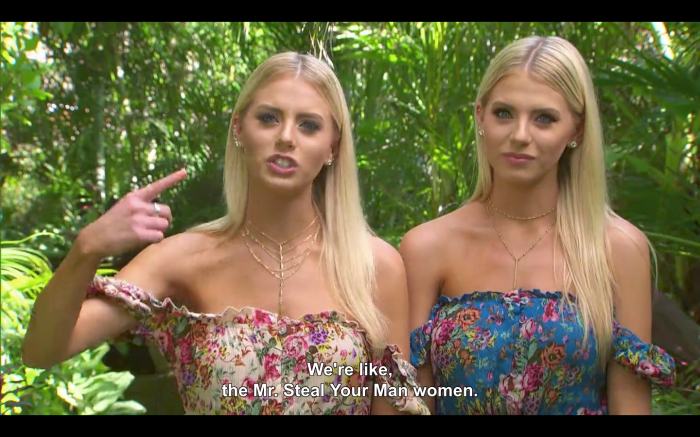 These two are real thinkers.

It also doesn’t help that the show continues to treat them as a single unit, and that they oblige for the sake of the schtick. It’s gross and continually reminds me that this franchise is still mostly beyond repair, even when they pretend to be woke about race and slut-shaming. So, because they’re “the twins” and not two separate women, they get a double-date card. They have their girl chat with Amanda, in which they reveal that they have their eyes set on Derek and Dean. Amanda promptly crushes their dreams – Haley accepts reality, but Emily refuses. Amanda also makes sure to let the twins know that they should be mean to Christen because one time she ate leftover scallops with her hands. Only the most crucial information is being disseminated in this girl chat.

Emily puts the pressure on Dean, refusing to take no for an answer and being incredibly annoying to the point where if he had actually wanted to go on a date with her before, he certainly does not now. He says that going on a date with Emily would be “doing a disservice” to both Danielle and Kristina. I can only imagine Kristina finds it very interesting that Dean is now suddenly very empowered to turn down a date because of a commitment to another woman. Ha ha ha. Emily even goes so far as to tell Dean “you don’t have a choice,” to which he responds, “I kinda do though…” which is actually pretty funny but Dean is still a turd.

Haley and Emily are forced to settle for Jack Stone and Tickle Monster, respectively. They’re not at all pleased, and manage to insult almost everyone in their wake. In addition to disparaging their dates behind their backs, the twins have also decided that Taylor and Danielle are “shallow, ugly whores” because they happen to be dating the two guys they were interested in. Cool.

Motion to banish the twins back to whatever Miller Lite commercial they crawled out of.

Karma almost immediately smacks Haley and Emily in the face, though, when hero-of-the-night Jack Stone decides he would rather spend his little remaining time with Christen rather than go on a date with them. Christen, girl, a man just chose you over literal BLONDE TWINS. Make him your husband immediately.

I can somewhat understand why the twins are pissed – it’s not nice to back out on a date at the very last second. But it was pretty clear they didn’t really want to be on the date with Tickle or Jack, and they didn’t do a good job of pretending or being nice. So fuck ‘em. When Jack backs out, they go fucking bonkers. I laughed so hard when they screamed “Fuck everybody here!” and Robby meekly replied, “But I didn’t do anything!” My laughter stopped when they procured a plate of scallops and threw them at Jack and Christen. WHAT THE FUCK, ABC? WE KNOW YOU GAVE THEM THOSE SCALLOPS. My laughter resumed when Jack Stone said in his ITM, “I don’t know why I’d wanna spend time with anyone who acts like that. I feel terrible about backing out on the twins last night, but I think they’re gonna be okay. They’re gonna go home, watch Frozen, and play with their fidget spinners.”