You guys. This was the finale! We’re done! This is spring semester senior year and I am phoning it in. How much of this feature length film of an episode could I have skipped if we didn’t recap things I’ve already watched and preview things I’m about to watch?

Chris Harrison approaches the “couples” to tell them Paradise is ending so nut up or move on. He says “the summer was saved.” Was it tho? He says “It’s been a great summer.” Has it really tho? CH talks about the potential marriages/ABC life sponsors they have here and Lacy literally thinks he’s referring to her and Daniel. Tickle Monster who are you even a couple with I don’t remember.

Lacy and Daniel have a conversation about…something. Daniel calls himself her king and Lacy laughs and I close my eyes and hope the end is near. How old is Daniel? I never found him attractive but he’s looking especially aged these days to be talking about fireworks in his pants. Lacy says she’s in love with Daniel and I die forever inside.

Chris Harrison isn’t even saying the P-word because all these couples got together 7 hours ago.  All of the inconsequential couples break up pretty expectedly. Dean tells D-Lo he can’t date her because he’s too in love with Kristina. Dean. Where. Are. My. Hand. Clap. Emojis. On. WordPress. You fuckity fuck fuck-boy. You had Kristina and wanted D-Lo and now you have D-Lo and want Kristina. What a shocking turn of events. Everybody loses with a guy like this.

Robby and Amanda are next on the break up train. Once again, Robby is a “hopeless romantic” who will say literally anything to get someone to date him. Can we imagine, for a moment, if Robby was a woman? He obsessively talks about his need for “Robby Juniors” and he tells every hot woman he’s known for five days that he’s in love with them and they’re his soulmate. This is a Tier 1 Crazy Bitch. Amanda unfortunately has to put down the Robby puppy but I’m proud of her for having the sense to know that this is dumb. (For now).

So we’re down to three. Adam and Raven, Taylor and Derek, and Lacy and Daniel. Raven’s like fuck if I knew these were the only other ppl staying I woulda dipped.

Lacy and Daniel head to the fantasy suite to sample some Canadian Bacon. Lacy tells Daniel she’s falling in love with him and Daniel looks like he just shit his pants. To be fair, that’s pretty much just his face. He tells her he feels the same way and I literally burst out laughing. Lacy closes this fantasy suite with: “If Daniel were to propose to me I would say yes. No question. Literally nothing could go wrong.” Lacy’s not so strong in the foresight department.

Taylor isn’t telling Derek she loves him until she bangs him. Valid, we don’t know what we’re working with here. No finger pointing and innuendos needed here, ABC, these two are doing it and they are READY. But sure, gimme more closeups of these ass grazes.

It’s the reunion all of a sudden. Everyone looks physically pained to be here. It’s officially “D-Lo.” Dean, applause winner on Bachelorette is literally booed. This is the good-guy turned villain plot twist we did not ask for. The good news for Kristina is being fucked over on TV is great for her brand. She wins the applause-o-meter by a landslide.

Chris Harrison tells us “It feels like there’s more to be addressed” RE: Corinne and Demario. DOES IT? DOES IT REALLY? WHO IS ASKING FOR THIS TO BE ADDRESSED AGAIN? However, if ABC’s goal with this season was to talk about this situation so much that no one ever wants to discuss it again, props, they’ve achieved it.

Jasmine bullies Christen for saying she bullied her when she spent the entirety of one episode calling her snake names and making fun of her for being a virgin. Kristina uses this opportunity to season her beef with D-Lo. Dean interrupts to say that they shouldn’t be arguing with each other because the blame all falls on him. Which is kinda true, but felt a bit martyr-y to me. Also, I believe Kristina was merely addressing the fact that after asking Dean on a date, her friend D-Lo didn’t bother to tell her/talk to her about it, which is a valid grievance if they were in fact friends. 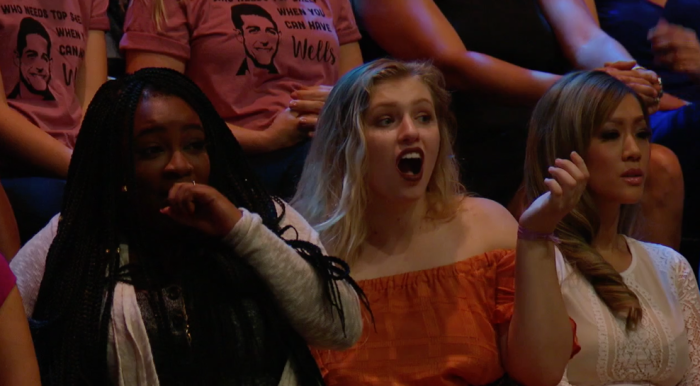 Is someone paying these girls to look shook?

Robby is always like “why aren’t I married” and then cheats on every single woman he dates. But the best part is he made out with some girl at a ZAC BROWN BAND CONCERT. Robby has peak Robbie-d. In response to the allegations/ocular evidence, Robby claps his hands and says “HERE WE GO!” Bruh, do you think you’re about to have the support of this 99% female audience for maybe cheating on your gf? Amanda is too over it to fight and gives him a “Sure, Jan” before saying they’re just “different.” I’m just happy we don’t have to worry about Char and Kins being exposed to the human version of Johnny Bravo.

Despite many issues, a twin makes a solid point. All these franchise dudes be like “This thirsty fan just fell onto my dick and started sucking it and I was like stop it bruh!” But you never see the Bachelor women with cheating photos/exes they ghosted to come on the show/secret relationships etc. TL;DR, these men are trash.

In Lacey and Daniel news, five min after Lacy peaked on the cloud nine of love, Daniel told her he just lied for the cameras. He also seems real confused by the fact that we all just heard the recording of him saying he wasn’t into Lacy. He’s like “WHAT? WHAT DID I DO?” Lacy has picked up a new smokey eye kit at Sephora but hasn’t calmed down on that waterline. But she no longer finds Daniel to be Adonis so, baby steps.

Alright. Raven and Adam. Shut the fuck up ya’ll are cute. How does ABC do this? I felt VERY “meh” about this couple until five minutes ago. But give me bath-robed bear hugs and here I am rooting hard for these two crazy kids.

Derek’s speech needs some work but NEIL IS WITH US ALWAYS. There’s a proposal, I cry and pretend it’s because I’m getting my period but really I’m just a person who cries at Bachelor in Paradise. I’m no better than these housewives in the studio audience.

For a second I got excited that Ben Z was going to tell us he was the next Bachelor and that this whole Ari fiasco was just a bad dream, but no. It’s just him carrying around his very cute doggo. Doggo for Bachelor. We out.